The Black Hands are a rootsy rock/blues outfit from Chesterfield UK, in the mould of Free, Cream and more recently Rival Sons and The Temperance Movement. Throw in some Deep South influences from yesteryear and you will start to picture where The Black Hands are coming from.

The band have actually been around since 2010 but have been ‘derailed by life’. A mixture of marriage, births and unfortunately bereavement all colluded at the wrong times to hinder the obvious talent on offer. Now they are back with a bang and ready to fulfil all the early promise that garnered much breakthrough recognition.

One of the most ‘70s-tastic new bands we’ve heard this week, this good-time album from Chesterfield rockers The Black Hands shimmies through big, unashamed nods to Free, The Stones and Cream among others. “Go on baby, put on your leopard skin boots,” purrs singer Andy Gannon, like the 21st century never happened. “We really went old school when recording this,” Gannon says. “The drums and bass were recorded in an old shower block in a football club dressing room, to give it a natural echo.” Cool.
Polly Glass – Classic Rock Magazine

From the first to the last note, this is an album that oozes a huge amount of style and confidence, which you will easily find yourself sitting back, turning the dial to 11 and losing yourself in.
10/10 – Roger Penkethman  – FrameMusic

This album is incandescent. I can’t find another word to describe it at this time, I’m quite speechless. If I had to wait 20 years and this was the outcome I would simply say ‘well done, great job’. I sincerely hope that life is kind to these guys and they can raise and retain momentum with this album, which is a solid 10 out of 10 and utterly breath-taking as a debut record. Who knew Chesterfield was in Alabama?… I don’t say this lightly when I say BUY THIS ALBUM.
10/10 – Maria Glover – Down The Front Media

The Black Hands are: 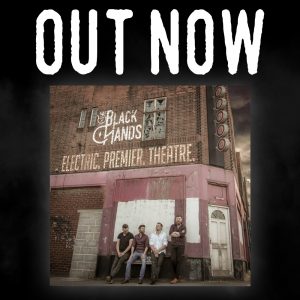